A Natural Burial for Gracie

I had never experienced a natural burial. Then I learned the hard way — firsthand — just how beautiful it is.

We could no longer deny that our beloved golden retriever was old. By 2020, Gracie, at the age of 12, had become arthritic, and was growing blind and deaf. Knowing that the end of her life was nearing, we considered a special final resting place for her. The answer, at least last summer, seemed obvious: my parents live in the country, in a home we call ‘the farm’. There’s a small pond with an island that Gracie loved to swim out to so she could chase the Canada geese. Last August, with heavy hearts, we gathered shovels and dug her grave. We covered it with plywood, hopeful that we’d have more time with her.

We did. Through the fall and early winter of 2021 Gracie had happy times, as we lavished her with attention, treats and an abbreviated version of her daily off-leash walk in the Toronto ravine. But by February, her health was declining and her enjoyment of life with it, and the decision was made. Our daughters, who were now young adults, returned home.

‘The day’ was set for the following week, giving us time to prepare ourselves in every respect. At the farm we discovered a foot of slush covered the ice on the pond, rendering it impossible to carry Gracie, as well as the bags of soil we would need to fill her grave, to the island. We selected a spot in the field where Gracie loved to dig for moles. It’s near a maple tree, where there’s lots of sun — perfect for a wildflower garden. We collected cedar bows and foraged for pine cones. As it was impossible to dig the frozen ground by hand, we asked a neighbour with a backhoe for help. Then, we returned to Toronto to spend our last days with Gracie.

On the morning, Gracie had a breakfast of fresh salmon and rice. We went out front, where she loved getting attention from the kids walking to school. It was her favourite weather, sunny and 3°. I’d made a shroud from our daughters’ old bedsheets, which I laid over Gracie’s bed. They were flannel sheets, which I thought would keep her warmer. Candles were lit. All 5 of us were still out front at the horrible moment of the vet’s arrival. When we were as ready as we’d ever be, he gave her a sedative, and we led her inside to her bed. She curled up into an adorable fluffy ball; for the last time, we kissed her, petted her, and said soothing words. Then the injection was administered, and like her namesake, she gracefully passed from sleep to death.

When we could muster the strength, we wrapped the shroud around her, knowing we’d never see her again. As we carried her to the car, I recalled all the times I’d yell “Gracie, want to go to the farm?” and she’d bound for the trunk. The hour-long drive to her grave was gut-wrenching but essential. I don’t think a word was said. I’d created a playlist that was a mix of songs about love, loss and memories, which we listened to while sniffling away. It will always be my Gracie playlist.

We reached the farm, and after leaving our hardly touched bowls of chicken noodle soup, our work began. Using a sleigh that a friend of ours had crafted on top of his wife’s skis, we pulled Gracie to her final resting spot. My legs felt weak and my heart ached. Trying to balance Gracie and ourselves, we lowered her into her final resting place. I was upset she landed with a thud. We held a little ceremony, in which we tried to capture with words the many ways she had enriched our lives. We placed a blanket of cedar bows over her, and then with shovels in hand we began filling the grave. For two hours we worked. It felt good, as if we were doing something for Gracie, when in reality it was for us. When the grave was filled the area looked messy with mud, so we took another hour and carted in loads of fresh snow from further afield. Over Gracie’s smooth white snowy grave we fashioned a heart made of pine cones. 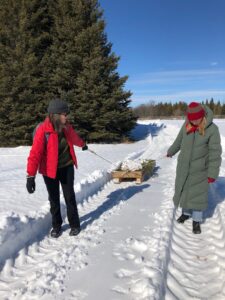 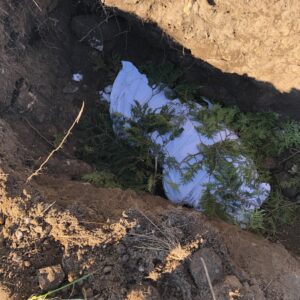 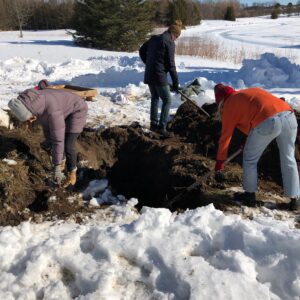 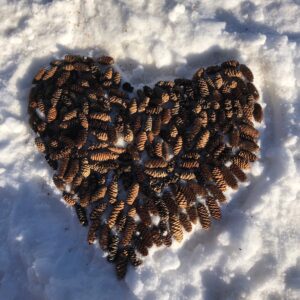 We returned to the house, where my parents led a toast to our beautiful Gracie. As we were sharing stories, we looked out the window. Not far from her grave were six deer. We’ve seen lots of deer there, but always lone deer.  It was like a message, Gracie was with friends. She was back in nature, body and soul.